So, day 2 of the big FIFA Inspection visit, at the very well appointed Rockliffe Hall near Darlington. 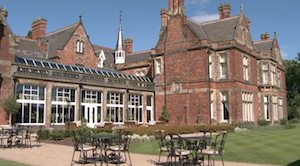 After a hugely unexpected but welcome catch-up with my sister in law who was there filming for ITV (you know a family has their priorities wrong when they find out what each others kids are up to within the confines of a media pen), the delegation arrived in their very flash helicopter

which may seem an irrelevant detail to you but for me who has a fear of flying and who was due to get in it (twice) a day later, it was pretty significant and more than a little reassuring to see that it wasn’t a rustbucket.  Apparently it belongs to Mr al Fayed and is the only one in the country; a Sikorsky S-92 if you care about these things.  All I cared about was whether or not it looked like it would get me to Manchester in one piece.

So the shoot was following the delegation around Boro’s training facility at Rockliffe Hall, hosted by Steve Gibson (it’s his pad, apparently, and a very nice one indeed) and Niall Quinn.  Disappointingly for me, they didn’t get the always entertaining Gordon Strachan on the case as well although I can understand that his priorities don’t necessarily lie with England.  All fairly straightforward; they took in a youth game then went inside to the indoor pitch, changing rooms, video and treatment room. 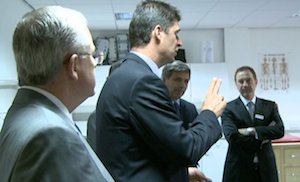 For the important people it was then on to dinner; for me it was a quick drink (and a handshake with the hosts) then up to a room and my laptop for the edit (with mighty Oxford United at West Ham in the other ear).

Edit done, I still had to make the transfer to Sunderland where I was staying the night.  I wasn’t really fussed about not staying at Rockliffe, an early start at Stadium of Light meant that it was best making the trek in the evening.  I wasn’t really fussed, that is, until I arrived at the Travelodge Sunderland Central.  Let me get one thing straight; I am no snob, I’ve been lucky enough to kip in some great hotels and some dives in my time, but I wasn’t really prepared for this particular culture shock.  Maybe it was the fact that they’d lost my booking, maybe it was because the duty manager clearly didn’t want to leave her McDonald’s long enough to find me a new room, maybe it was the tempting ‘breakfast in a bag’ they were offering for £4.50, but I’m not going to be recommending this particular establishment in a hurry and I don’t think it’ll be on the list of FIFA approved hotels either (although that decision is out of my hands).  Because I try to embrace digital culture, I did check in on FourSquare, but decided against telling anyone about it.  I even added a tip (Don’t stay here).

At the end of the day, and a long one at that, a bed is a bed, even if it backs onto a window which backs onto a drunk bloke ranting and ripping up street furniture at midnight.

← I shot: Nick Clegg and Fabio Capello
The Next Big Thing: Facebook Places →