I shot: the leader of the FIFA Inspection Team

The 4th and final day of the FIFA Inspection Visit, and a thankfully somewhat less hectic day than the previous one.  It certainly started better than the day before; the Midland Hotel saw fit to put on a breakfast rather than put a bag with breakfast in outside your door as they do at the Travelodge Sunderland Central.

Manchester Central was the venue for the closing statements 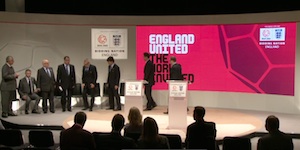 and subsequent press conference which formally ended the week’s inspection visit.  Nothing particular to report; Harold Mayne-Nicholls, the Chilean leader of the FIFA Inspection Team 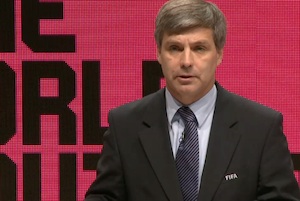 made some very positive noises and certainly seemed happy with the ‘perfect’ way in which the visit had been organised, but naturally giving nothing away in terms of our chances of winning the bid.  He did, however, allay fears regarding the two negative angles which the press had conjured up (David Cameron’s decision not to meet them and the lack of a visit to a match) which must have gone down well with the team. 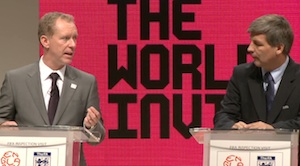 then offered his thanks and goodbyes 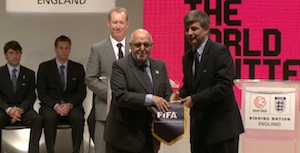 and it was off to the airport for the delegates.  Back to the press room for me and an upload of the videos before returning to the stage a couple of hours later for the bid team’s closing press conference which seemed to be handled without major incident or niggles from the assembled journos.  I did hear the odd grumble from them in the press room afterwards though; why some people feel the need to drum up a negative angle on these things when ultimately they’d be good for the country I’ll never know, but that’s why I’m not a journalist.

Train home, another long encode (this trip has made me realise that I’m wasting a lot of time just waiting for files to finish…it’s a long and very dull process even to explain how digital files get made so I won’t trouble you with that just yet) and a Friday edit putting together a montage of a very long and memorable week: