Strict Standards: Redefining already defined constructor for class googlefonts in /home/sz5qpkso2cdf/public_html/wp-content/plugins/wp-google-fonts/google-fonts.php on line 140
 Arcade Fire and Google get it on | Resolution Square

Arcade Fire and Google get it on

As you might have guessed by now, I’m embracing new technology because I’m excited first and foremost by the prospects it offers those of us in the creative industries and also as a viewer.  And when a new bit of tech is combined with music from one of my favourite bands it’s bound to go down really well.  So like millions of others already I’ve been enchanted by the new interactive video offering from Google and Arcade Fire.  Called The Wilderness Downtown

and featuring the band’s “We Used To Wait”, as I understand it it’s a showcase for Google Chrome and the possibilities offered by the new HTML5 web standard and its video, audio and canvas capabilities.  My techie knowledge stops right about there; I’ll certainly be doing some more digging into what we can expect and moreover exploit from HTML5, but for the moment like everyone else I’m sitting back and marvelling at the genius involved.

If I’m being picky, for me there’s a certain element of style over substance (or is it the other way round?); whilst I’m excited by the technology involved and I get the whole interactive thing and the fact that you can customise and share the experience, as far as a music video goes it’s no Bohemian Rhapsody.  I don’t know if my browser settings aren’t optimised for it (although I’m running it on a 17″ Macbook Pro 1920×1200 screen) but I found the window sizing and placement distracting rather than an enhancement to the video.  Could the sequence have been cut into one window?  Would that be defeating the point of the whole thing and regressing it to a traditional, linear video experience?  I’m being picky; I’m sure the point was to showcase the technology rather than create the perfect video, and I for one certainly couldn’t do any better.

If you haven’t had a go on it yet, you’ll need to download Google Chrome first and then go to The Wilderness Downtown where you input the address of where you’d like the video to take place.  Towards the end of the video you get your chance to get all Tony Hart and to create your own postcard which may be used on Arcade Fire’s next tour.  I’ve done one for Oxford United fans featuring the 3-sided majesty that is the Kassam Stadium if you’d rather see that than your own:

If you can’t even be bothered to run the video, here’s my poor but United-spirited attempt at a postcard message: 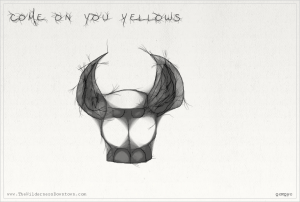 If you’re geeky like me and you want to know more about the technology involved in making the vid, you’ll find it here:

So what do you think of the whole idea?  As a viral campaign I’m sure it’s already assured of victory judging by the Twitter traffic generated by it, and I’d be interested to see how it affects Google Chrome downloads…