It’s been a while.  Far too long, but I’ve had a few months of solid work and haven’t had the energy to keep this up.  It’s a poor show and defeats the object of starting the site in the first place but I’ve had to forego forward planning in order to meet all my deadlines.  I will catch up though and will try to do a blog covering recent jobs but restarting where I mean to go on, this is what I was up to on Sunday.

The England captain took a trip back to his boyhood club, Eltham Town 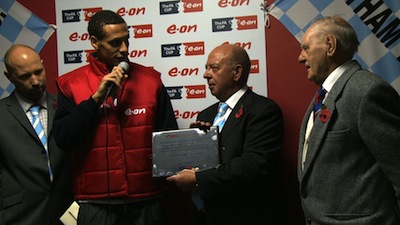 to promote e-on’s ‘Energy Fit’ campaign, in particular their ‘Club Makeover’ competition which is offering amateur football clubs the chance to get an energy saving makeover worth around £40k.  The e-on team decked out the club’s facilities with swanky stuff like solar panels, energy saving lights and even hot water, and Rio was given a tour before hitting the mud and coaching the young pups outside. 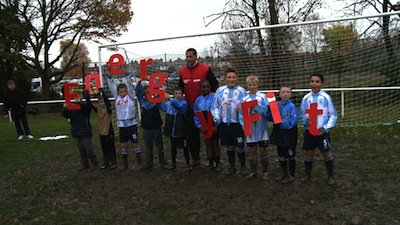 I have to say I didn’t know much about the club beforehand but I was really impressed with their setup, fancy lights or no fancy lights, and I couldn’t help thinking that the national game can’t be in that bad a state if there are clubs like Eltham Town around.

We then had a quick chat with Rio 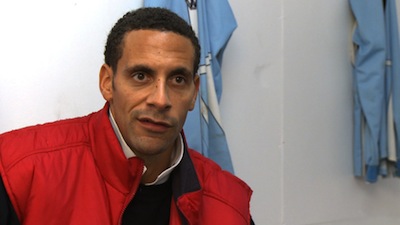 about the e-on project and the France game, where he revealed that he can’t contemplate losing because of the stick he’d get from Evra when he returned to training.  It was the second time I’ve interviewed him in 6 months and although he clearly didn’t remember me, Rio was professional as ever.  I’m a big fan of his because he’s clearly got more in his locker than booting a ball around and I genuinely believe he cares about the projects he gets involved with.

An unexpected bonus of the day was catching up with old Soccer AM and Channelbee mucker Fenners in his new capacity as tv personality, complete with showbiz scarf.  Always good to see him and I’m so happy he’s back in the Sky fold as on-screen talent.  I’m ashamed to say that I haven’t seen his new show Take It Like A Fan yet but I’ve only just signed up to Sky Sports again; must do that this week.

I’m editing the bits and pieces today so I’ll post a link when they’re up.

← Slacker
Was it this wot won the FIFA World Cup for Qatar? →