When I was 16 I was going to be a top athlete and I looked like this: 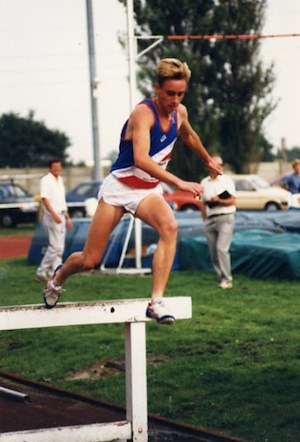 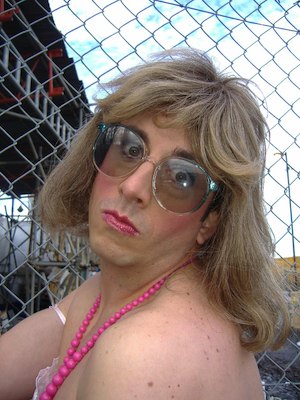 All in the name of ‘art’, or at least a cheap Soccer AM gag which I guess isn’t entirely the same thing.  My point is that things don’t always work out the way you expected them.  After university I wanted to be an actor/director (I probably spent more time on drama stuff there than I did on my course) 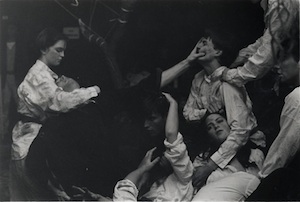 so for some reason I thought that showing people to their seats and serving them champagne at the London Palladium was the way to go about this.  I was clearly in the wrong place; Sheree Murphy got the job of popcorn seller and went on to have a very successful acting/presenting career as well as marrying a footballer.  I did rise to the position of head VIP butler (and could tell you a few stories if I wasn’t so discreet) 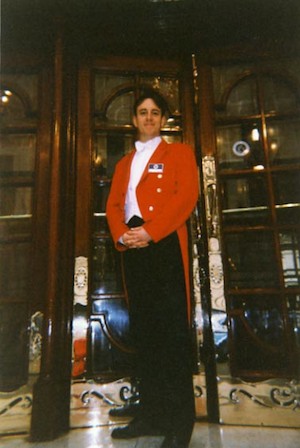 and eventually led the backstage tours there and at the Theatre Royal, Drury Lane.  I eventually did get into acting and persuaded my mate at the Palladium to take what I thought was a really arty picture involving eyeliner and some sort of necklace to put in Spotlight (actors’ directory) 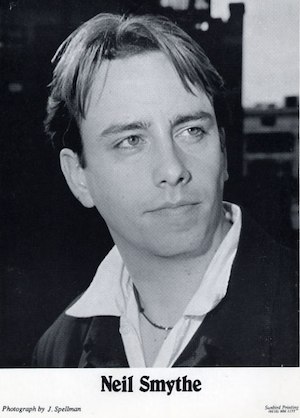 but nevertheless I picked up some semi-pro stuff, a T.I.E. tour and a summer of open air Shakespeare, where we were routinely ignored by groups of foreign students who didn’t want to be there 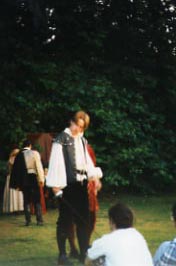 but I was hardly Kenneth Branagh, so I decided my next calling was to be a holiday rep in Ibiza. 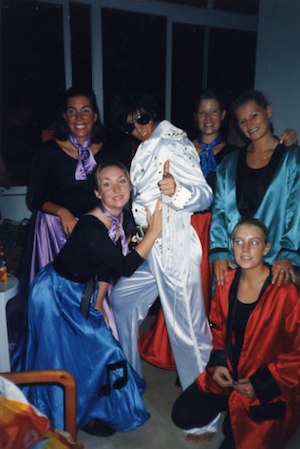 My first and only season with Thomson started with a food poisoning outbreak which made the papers over here and ended with my head rep running away with £3000 worth of excursion money.  Naturally this wasn’t going to put me in prime position for a promotion so I took another turn and decided that tv was now for me.  Channel 5 decided that anyone who could deal with angry holidaymakers with the runs could handle complaints about snowy reception and pornography (remember this was 1998) and I joined their Duty Office team.  There I spent a hugely enjoyable few months fighting my colleagues for the task of listening to the overnight voicemail messages (you get a lot of interesting people calling a tv channel at night, especially when they’re showing pornography) and planning how I was going to get to actually make tv programmes instead of hearing people complaining about them.

Sky then took me on as a presentation scheduler, where I slotted promos and idents into the Dot.TV schedule (remember them?) until I plucked up the courage to mail what was becoming my favourite show, Soccer AM, to ask if I could do some work experience for them on a Saturday.  This luckily coincided with several crew members leaving, and after a chat in the canteen with producers Andy Harris and Tim Lovejoy, during which I was asked what music I listened to and what football team I supported, I joined the crew of the show full-time, paid, in my first production job.  Since then (1999) I have been asked many times how I got into tv and I still find it hard to explain just how lucky I was.  Sure, I pushed myself forward, but everyone in tv knows stories of runners who have done years on the photocopier and coffee machine before getting their chance so I will always be grateful for my relatively easy break.

Fast forwarding through 8 seasons of ideas meetings, early mornings, late nights, occasionally shambolic and sometimes unforgettable live shows, great guests and Meatloaf, I left Soccer AM in 2007 after having become one of the show’s producers 4 years earlier.  On a professional note, most of what I did is on my CV, but from a personal point of view these were incredible years.  Not only did I get an education in tv production (we were such a small team we had to know how to take on every job) and the chance to work with and to meet great people 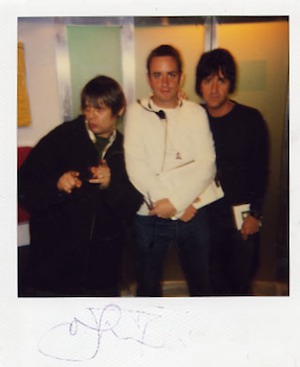 we were lucky enough to work on a show with a very loyal and passionate audience.  With their help we got a star put on the England shirt for the first time, witnessed ‘Save Chip’ banners at sporting events the world over and even got Iain Dowie’s made-up word, bouncebackability, put in the dictionary.  I’m also particularly proud of the fact that we were one of the first programmes to regularly put user-generated videos on air and got behind the forces years before other broadcasters woke up to the great work they do.  I also got to dress in daft costumes and occasionally performed nonsense on screen which satisfied my theatrical bent in some small way, although I could have done without the annual humiliation that was the Dance Off.

Even perfect jobs have to come to an end, and after Tim Lovejoy’s departure in 2007 I decided to take on a new challenge and joined him and some of the old team at Channelbee

his joint venture with Simon Fuller at 19 Entertainment.  I had been running Tim’s MySpace for a year or so and it was clear to us that the internet was opening up a whole new world of opportunities for content providers.  Our idea was to create a new platform for video entertainment online, with live gigs, celebrity and sports features, ‘original’ sketches, magazine shows, interactive games, a vibrant forum and more.  The big pull for us as producers was that we were now entirely in control of our own output; not only did we write and direct the videos as we had done at Soccer AM but we now were shooting, editing, encoding and uploading it ourselves as well.  We even had to run the technical side which taught me things about data transfer I really never wanted to know.  After a few initial hiccups, I believe we succeeded in creating professional content at a fraction of a tv budget and more importantly built up a loyal and exciting online community.  I’ve always been a believer in a two-way dialogue with your audience and this brought us much closer to them than was possible at Sky in those days.  Again fast-forwarding through over 2 years of life at 19, including a brief stint producing ‘David Beckham’s Soccer USA’ with the team for my old employers at Five, we were told in October 2009 that the project would be closed down a month later.  I still believe that we were on the right track; almost 4 years on I’m working on successful YouTube channels and I feel that given the chance we could have been part of the first wave of YouTube successes.  Some of the few videos which are still sat on our YouTube channel, albeit rough around the edges, have pulled in some impressive views, but back in 2007 YouTube just wasn’t seen as a viable platform so we developed our own bespoke video site at great expense which I believe killed us.

Anyone who’s been made redundant, especially with a young family, will know that it is a testing time.  I had over 10 years’ experience in tv and digital media, but two staff jobs had left me short on wider industry contacts and with the tv industry being as it is, for a while the phone was all but silent.  Then early in 2010 I took matters into my own hand and decided to go it alone with Resolution Square.  The idea (you can read more about it here) is to make the most of the exciting opportunities offered by the digital future.  So I’m here to make content for whoever wants it and however they want it to be seen.  If that means one day I’m working on a YouTube channel and the next I’m in a tv studio, great.  Ultimately I’ll be looking to have my own ideas commissioned by broadcasters and other platforms but in the meantime I’m enjoying this new challenge and am a true digital media convert.  Much of the credit for that has to be taken by Hyper Island, ‘the Digital Harvard’, a Swedish digital training institution who brought their expertise to the UK TV industry for the first time in early 2010.  I was lucky enough to form part of their first tv production masterclass and I’ve got a feeling that the few days I spent with them changed my life forever.

My first year going solo saw me flying in Al Fayed’s helicopter with the FIFA World Cup inspection team, meeting David Beckham on a training camp in Trinidad, interviewing Rio Ferdinand in his restaurant, witnessing Watford FC smashing my brand new and quite expensive lens, eating burgers with Gordon Banks, getting paid to watch the World Cup, developing and pitching a new tv show and working with an inspirational charity.  I spent far too much money on kit and not enough time doing my accounts.  In 2011 amongst all my branded work I also series produced for the first time (GoalMouth, for Disney XD) and spent 3 weeks at the World Cup embedded with the England women’s football team.  Since then I’ve produced for broadcasters, brands, YouTube channels, athletes, governing bodies, charities and more, and I’m relishing the challenge.

Which brings us to the present day and this site.  You can read more about what I’m trying to do with it here.

Thanks for reading; I’d love for this to become a two-way thing so please feel free to comment anywhere on the site or share my blog as I start to build it up again.  And of course I’d love it even more if you’d like to hire me; just fill in the fields below and I’ll come back to you as soon as I can.