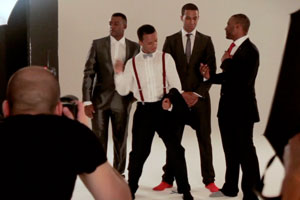 I shoot and edit the video content (interviews and behind the scenes montages) for Their Mag, the sister publication to Rio Ferdinand’s #5 Magazine. Each edition features a different celebrity guest editor or editors, with the first edition starring JLS, and Alexandra Burke to follow early in 2012.

In June 2011 I was asked by FATV to be the FA’s official videographer for the 2011 Women’s World Cup in Germany. Together with their reporter, I was embedded with Hope Powell’s squad throughout the finals campaign from the squad announcement in London, training camp in Leicester and the tournament itself in Germany. I shot (EX3 and 7D), edited and uploaded daily content from the camp including player personality profiles, training footage, interviews and edits of player video diaries.

These were distributed on FATV/YouTube and several clips were used by the BBC to supplement their tournament coverage.

Upon our return I put together an overview edit of the team’s story:

The work aside, the experience was something I was privileged to be part of. Having worked with professional football for over 10 years I’m very familiar with how the industry works, but spending an extended period of time with a working squad gave me a new insight and understanding of what players go through at a major tournament. I also came away with a huge respect for women’s football and particularly for the commitment and professionalism of Hope Powell’s players and staff, and if things had gone our way in the penalty shootout I think we could have seen them going all the way.

Picked up a fun job in more ways than one last week. Fun because I got to team up once again with Soccer AM and Channelbee’s Robbie Knox and also because we were tasked with filming some of the nation’s best comedic talent, at the Loaded LAFTAS. A job for co-sponsors Yazoo, we were in the media run interviewing guests and nominees, quizzing them on their favourite films/funny lines/funny words etc. I was doing the donkey work and brought Robbie in to be the on-screen talent as a) I used to like his vox pop bits on Channelbee and b) he is cheap. Not a huge amount to report, all went pretty much according to plan and predictably the bleep machine (tone, for the technically minded) got a good workout in the edit, especially when it came to everyone’s funniest word. Keith Lemon told us bizarre stories about sweaty nether regions and touching dogs, David Baddiel admitted that The Infidel didn’t make his top 3 funniest films and Vic Reeves seemed pretty perplexed by Robbie’s interviewing technique. He may be no Paxman but all in all I think he did a pretty good job. You can judge for yourself anyway now that the vids are up on Yazoo’s YouTube and Facebook channels. There were about 6 in total so you might want to check back there in a while to see the others:

Geek alert: we shot on my 7D with my Canon 17-55mm and newly pimped up Easom rig. I’ll stick a photo of that up at some point; looks pretty fine.

I shot: lots of people on the Underground with no pants

Happy New(ish) 2011. I don’t do resolutions as a general rule but this year I’ve promised myself I’ll keep this blog going properly. I’m not looking to become the next Perez Hilton or even Philip Bloom (check him out if you’re in any way a camera person or into your film-making, he has achieved God-like status amongst the DSLR world and camera geeks the world over go weak at the knees in his presence) but apart from anything else I want this to serve as a record of what I get up to because sometimes I find it hard explaining what I do nowadays!

So, onto my first shoot of 2011. I’ve been a fan of Improv Everywhere for a while now; they’re an American group who stage fun, brilliantly creative stunts, often on a huge scale. I haven’t by any stretch watched their entire output but amongst other things they’ve given a little league baseball game the full-on sports OB treatment:

they sent a fake Ben Folds on stage to pretend he was Ben Folds at a Ben Folds gig:

and they recreated a classic scene from Ghostbusters in the New York Public Library:

I imagine the brand itself is now big business, judging by the number of YouTube views, but at the heart of Improv Everywhere is a sense of fun and community. The success of most of their ‘experiments’ depends very much on the participation of its volunteer ‘agents’ and in many cases anyone is welcome to join in.

One of their most famous and successful stunts is the annual ‘No Pants’ Subway ride which started in New York in 2002 and now takes place in many cities around the world. The premise is simple; on a given day, as many volunteers as possible take to the world’s subways, take their trousers off and pretend that it’s perfectly natural. There’s no real point to it other than doing something fun and trying to raise a smile. The key for agents, however, is to keep a straight face and not to acknowledge the fact that others are doing the same thing.

New York’s ‘No Pants’ day now counts agents in their thousands; the scale of the London mission is somewhat smaller

but by all accounts this year’s event (I estimated around 100 took part) saw around a 300% increase in numbers from 2010. So with nothing better to do with my Sunday afternoon I rigged up my camera and met the London organisers in a pub just north of Trafalgar Square and then proceeded to follow the mission up and down the Bakerloo line for the next hour and a half. (Rules officially stated that even members of the media were expected to disrobe but my backpack was full of camera gear and nobody needs to see my worn shreddies on God’s day of rest.)

Reactions to carriages half-full of pasty Brits in their undercrackers were mixed; some laughed and clearly appreciated the silliness, others resolutely refused to accept that it was happening and apparently some were ever so slightly hostile. The mission was organised so that some agents got on at every stop along the line, adding to the confusion of those inside. All in all it was a welcome sight; London tube etiquette has it that you stare blankly into space so it was a refreshing change to be actively encouraged to look around and acknowledge your fellow passengers. And for those involved, I fully understand the sense of achievement they felt when the train rattled back into Charing Cross; it’s not up there with discovering penicillin or climbing Everest but making London Underground passengers smile is no mean feat.

Video-wise, shooting without a permit on the London Underground is a tricky one, especially given the current climate, but one of the benefits of shooting on my 7D (for the uninitiated, it’s a stills camera but they’re increasingly used to shoot video…won’t go into why right now) is that it doesn’t attract the attention the way a video camera does. The downside is that they’re notoriously hard to keep steady without a rig (more on that in a few days) and recording sound is a pain, but as I needed to keep a low profile I shot everything handheld, no rig, just attaching a mic for the (very noisy) interviews in the pub at the end. For the geeks amongst you I did have two lenses, my Sigma 30mm f1.4 and Tokina 11-16mm f2.8. I really could have done with my zoom but it’s still in lens hospital after Watford FC did this to it:

So here’s the vid, a bit rough and ready in places as it was shot very much on the hoof and edited quickly, but hopefully it tells the story. I’m certainly hooked, and although I don’t expect to be riding the Northern Line trouserless any day soon, my name’s going to be first on the list if there are any more Improv Everywhere style stunts planned over here.

If you like your videos with a smoother encode, I’ve also got it on my new Vimeo channel:

Video by me, photos courtesy of Idil Sukan, thanks to Improv Everywhere for their inspiration!