I shot: Brother and England at Wembley

Due to my commitments on GoalMouth and also to the fact that he’s got more staff now, I haven’t done much for Sheephead at FATV recently. In fact those who knew Channelbee will be happy to hear that Joe’s not only got Jon Dyson but also Tony ‘the Hammer’ Watson on board now which is great news as he’s a top bloke who knows his football even if you can’t understand what he’s saying most of the time. So naturally I was happy to get the call to do a day with the team up at Wembley covering for Dyson who was on U21 duty.

FATV seem to be growing as an operation and now have tv giants Endemol behind them so I fully expect them to go from strength to strength; think of the assets they have at their disposal (England players/footage, FA Cup) and the huge fanbase (pretty much anyone who’s interested in football) and you can see I’m hardly going out on a limb there. Joe and his team have the access, they have the creative experience and vitally they have the trust of the hierarchy at the FA and the end result is a great example of what branded content should be; it engages the audience whilst promoting the product. They’re not taking it easy either; on Saturday at various times I think I counted 8 pieces in production. That’s a lesson to any brands seeking to get into video; one glossily produced corporate or brand promo does not a digital audience make, unless you get lucky with one of those elusive ‘virals’. In my humble opinion little and often is the key to building brand awareness and eventually loyalty through video.

8 pieces on the go in one day also meant I was in for a pretty full-on day’s graft. First up was a 3 camera acoustic set and interview featuring Brother, hosted by ESPN’s Richard Lenton. Lighting conditions weren’t ideal and it was a fast turnaround in edit so it’s pretty rough and ready but we prioritised getting the piece out before kickoff rather than making it look and sound prettier:

Channelbee trivia point about Richard Lenton: he appeared as a guest in the original pilot show for the project. Back then he worked at Sky but not on camera, and came to us with a brilliant clip he had of him when he blagged his way onto an African channel as a presenter during the World Cup. During one game his co-presenter was caught short whilst he was on air…cue a lot of jiggling in his seat and an eventual panic dash off camera whilst Richard tried to hold the fort. Wish I could find the clip on YouTube…

Back to Wembley, and Brother duly edited and uploaded, next job was pitchside to pick up whatever I could for a low angle perspective on the game. I may have been 10 feet away from the Swiss keeper but I can tell you, crouched behind the goal isn’t the way to watch football. Stuck without a stool, hunched over a tripod just high enough to peek over the hoarding but low enough not to attract the wrath of the fans in Row A, sweltering under the mid-afternoon sun wrestling with temperamental kit…so I couldn’t tell you how we played but it was certainly a buzz. Then a mad dash into the tunnel for half-time, a desperate swap of cameras and off out onto the pitch with the England Women’s team for their official send off to the World Cup. Back into the tunnel for interviews with some of the Women’s team, back pitchside for midway through the second half, another mad dash upstairs after full time and another hurried edit to get the pitchside cut up on the site for 10pm. Again, priority for the edit was to get it up as soon as possible rather than creating a masterpiece, but I think it’s always interesting to view action from a different angle and here it is:

Today I edited the interviews with the Women’s team so that’s up now:

A pretty full-on day but as I say, I really believe in what FATV are doing and it’s a pleasure to put the hours in with them. Looks like I could be heading out to Germany to be the videographer for the Women’s team at the World Cup which if it happens would be a real honour.

As I intend to devote more of my time to the site this year I’ll hopefully be posting up more video content. Admittedly at the moment I’m only making content for other people so some of it may not be to everyone’s taste but I’m building up my Vimeo and YouTube channels where I’ll be hosting a lot of the vids I’m making (apart from the tv show; you’ll have to watch that on the old skool box in the first instance).

If you’re not familiar with Vimeo, I’d describe it as a more discerning YouTube. You won’t get as many cats playing the piano or fat blokes miming to Europop but it’s the film-makers’ choice mainly because it treats its source video with more respect; basically your videos look better after uploading. There’s also an option which lets subscribers offer their videos for download if they choose to which is handy for various reasons. As for YouTube…well it’s YouTube. I’m putting videos there because there’s always a chance that something will fly completely at random and any publicity is good publicity; my ‘No Trousers’ video from last week has already been viewed over 6000 times which is a bonus:

On my YouTube channel as well as uploading new videos I’m trying to locate some of my old work (especially from Channelbee) which has been uploaded to other people’s channels and these are in the Portfolio section in the right hand sidebar. If it’s there I’ve either shot, edited, directed or appeared in it; if you need to know which just drop me a line. There’s a varying quality because the videos span a few years and therefore (hopefully) a steady improvement, but if you’re a prospective client I’d suggest checking out my Vimeo channel instead which is more relevant to you.

I’m not obsessed by subscriber numbers, likes or comments but do get involved if you feel the need; I’d be grateful (assuming your feedback is positive).

Channelbee viewers…I did save quite a few things before we left the building so I may upload some of them in the coming weeks. For obvious reasons I’m still debating as to whether to upload the never before seen shoot where I took salvia on camera as an experiment!

I’m not overly set on the YouTube design at the moment but again it’s something I’m sure I’ll tinker with in due course. Hopefully if I start picking up enough hits I’ll unlock more flexibility in the design options.

So take a look around and drop me a line if you have any questions!

Thanks for stopping by.  After months of saying I was going to get around to doing this, I’ve finally done it.  It’s by no means finished; I’ve got to get a showreel up and more example videos, plenty more links and then there’s the blog to think about, but it’s a start.  As I’ve said on the ‘Resolution Who?‘ page, what I’m trying to do with this is have a half-portfolio, half blog site thing going.  So hopefully I’ll be able to pick up new work from it but I’ll also come up with interesting stuff to blog about.  I think I’ll start with splitting the blog into pesonal/random stuff and more digital media/social media-based topics but I’ll see how that goes.  I’m pretty new to blogging so if you’re not and you’ve got any tips for me it would be great if you could comment or send me an email and of course bookmark/RSS me.  I’ve already lined up a few people I want to talk about and I’ll stick something up every time I do something of interest on a job (one to follow shortly) and of course I’ll post stuff I find on Twitter or elsewhere.

To those of you who know me from Channelbee, I’ll be sticking up what videos I rescued before I left, certainly the ones I had a hand in, on my YouTube channel.  Gradually.  We may have a music issue but I’ll keep my fingers crossed on that.

I’m going to crack on but should be posting again shortly. 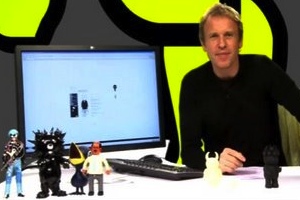 Channelbee was Tim Lovejoy’s entertainment, comedy and football video site, a joint venture with Simon Fuller’s 19 Entertainment.  I was asked to join Tim and some of the old Soccer AM gang to help set up what was to be an exciting new venture for all of us.  It paved the way for what I’m doing now, and I believe we were on the right lines in many respects, but it wasn’t to be(e).  Had YouTube been where it is now at the time I think we would have been on to a very good thing!