I shot: A Taste of Spain

So if you read my previous blog you’ll have heard me mention that I’m not afraid of hard graft. What I am afraid of is finishing a 13 hour shift at Wembley at 9.30pm, nannying the driver with the best route back to Surrey, and then leaving home again at 3.15 the next morning for my next job. I suppose I’ve done it now, I survived, but I wouldn’t recommend it.

The day (I use the term very loosely) started badly when the driver who’d come to pick me up considered it normal to arrive 10 minutes early (at 3.15 in the morning that’s not a virtue), leave his engine running outside my house (my street is so narrow you can touch a car in the road by leaning out of the house either side of the road) and to talk to his mate on the phone with his window open. I repeat, at 3.15 in the morning. That said, there’s something quite intriguing about getting up that early; if someone asks you to get to work at 7 it’s a pain, but a 4am start is altogether more of a challenge and therefore almost…fun. Driving to work past the fleshpots of south London when they’re kicking out after a solid Saturday night is an eye opening experience, and ordering sober at 5am from a 24 hour McDonald’s almost righteous.

Again the job was with/for an old Soccer AM/Channelbee chum, this time the bearded wonder that is Robbie Knox. We’ve embarked on a similar journey so help each other out by hiring one another when we need an extra pair of hands on a shoot. His client in this case was the agency for the Spanish Tourist Board, organizers of the now annual ‘A Taste of Spain’ extravaganza which takes over Regent Street offering food, drink, entertainment and sport with an Iberian twist. The event was due to kick off at midday, leaving us 8 hours to pick up shots of the preparations. The main idea of the early start was for us to pick up a great timelapse of the street being transformed into a fiesta but in reality (and I haven’t seen Robbie’s shots yet) we’ve probably got an hour of Saturday night dregs relieving themselves outside Uniqlo and then 7 hours of vans delivering scaffolding. 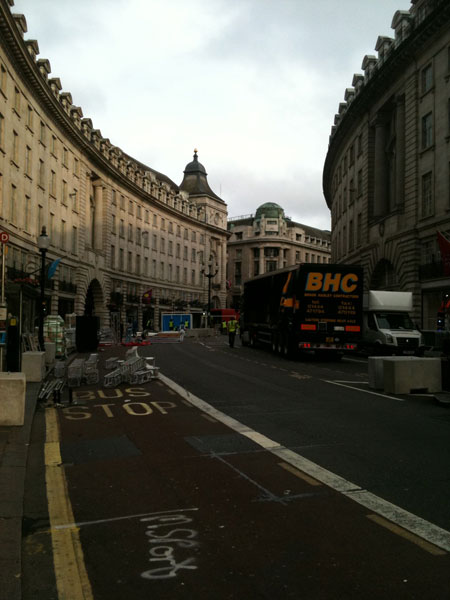 The sky looked nice though, and McDonald’s did well out of us (except Jamie the runner who inexplicably for a young bloke who can get away with it has made a pact not to eat fast food throughout 2011).

Midday came and so did the throngs. I had mega rig with me 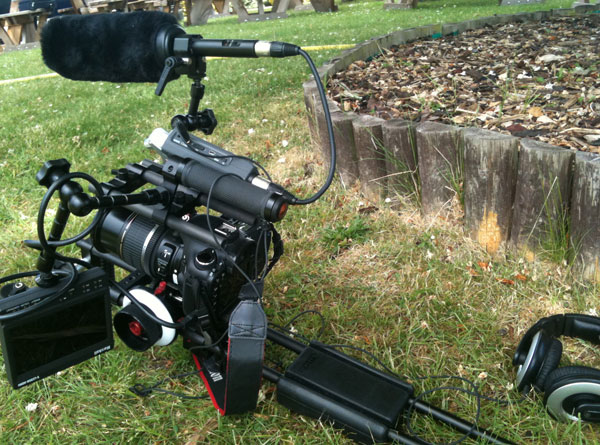 which is never easy on the move in a big crowd but I did my best. Our brief was to capture as much of the event as possible but with a focus on the sports zone, a pretty impressive collection of stands offering golf swing analysis, an F1 simulator, the World Cup, basketball matches and more. Robbie got the job of filming the massive paella and sangria stalls, for some reason, maybe because he was the boss.

That’s pretty much it really. It rained and we didn’t get any paella or sangria (well, Robbie says he didn’t and we have to take his word for it) but we did get a few pints in at the end of the day (whilst we were transferring the rushes from my camera to his laptop, in case our wives are reading this) and Jamie the runner got to guard our bags behind the motor sport stand all afternoon. We got closer to the World Cup than we probably ever will do again, and I can say I saw Regent Street sober at 4am. As for the film of the event, we’ll have to wait until it goes through the various channels but if it reflects the effort many people put in it should do the trick. I’ve long since been sold on Spain but anyone getting their first taste on Sunday will have had a treat.