Welcome to the first ‘I shot’ of the site.  I’m still undecided about the title but I’ll go with it for now.  Sure you know what I mean anyway; one week it’ll be ‘I shot…muffins’ which doesn’t have the same ring about it but that’s the beauty of my job at the moment; there’s no shortage of variety!

So yeah, Kasabian.  I was tasked with shooting and editing a few very quick bits to use at V Festival this weekend; their intro and outro messages, basically.  An early start and flight to Belfast to catch up with Serge and Tom before their gig in town that night.  Myself and two P.A. guys got settled in the very swanky Malmaison where we were shown to our rather well-appointed suite where we presumed the shoot would happen: 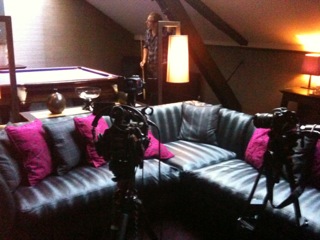 All very dark, moody and perfect for the shoot.  Trouble was, the shoot wasn’t happening there.  But it’s a lovely hotel, especially if you like black and purple, so I’d recommend it if you’re in town.

The actual location was an even swankier country hotel outside town, the Culloden.  Lovely place; according to our cab driver it was where England stayed when they last played (and lost) there.  Trouble was it wasn’t nearly as evocative for the shoot as the Malmaison but that’s life.  I’ve realised over the years that just when you think something’s sorted, you often have to resort to Plan B and get over it.

Tom and Serge were top blokes as always although understandably preoccupied by a poltergeist which they (or Tom, at least, if I remember rightly) had witnessed at the hotel.  Anyone who’s about to see them at V are in for a great night (nothing new here because they’ve always come up trumps whenever I’ve seen them, I’d say the best British band of the last 10 years); I’m paraphrasing what they said to P.A. but it was along the lines of ‘it’ll be like everyone’s Christmases, New Years and birthdays all rolled into one’. 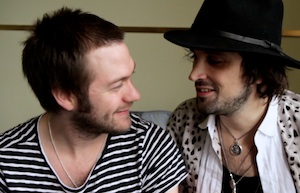 Can’t embed the video, you’ll have to watch it via The Sun here

Pretty impressive by anyone’s standards, but I’m with Serge, it wasn’t a patch on this:

I haven’t watched the show since I left but I doubt anyone’s going to knock Serge off that particular perch; he did it in his rockstar shoes and all.

I digress, but that’s about it.  I’ve since been editing the videos in time for them to get them ready at V, although I won’t be there to see the fruits of my labours as I’ve got a big job on Monday so can’t risk it; I’m off to see the boys tonight in Brixton instead.

For those who are interested in kit and stuff, I used my Canon 7D with the Canon f2.8 17-55mm lens, and recorded sound via a Sennheiser shotgun mic into my new Zoom H4N recorder.  We couldn’t use lights as we had to travel…light…but as you’ll see from the vids when I post them, we could just about get away with it.